The Story of Thistle's Music

Led by composer, singer and harpist Thistle Jemison, the music of THISTLE is primarily that of a story-teller, and is influenced by her studies and collaborations in jazz, western classical and world music. A sort of Avante Guarde Chamber Folk trio, cello and percussion provide a rich cinematic backdrop upon which stories are sung. Inspired by the writing of Hans Christian Andersen, THISTLE's 2019 debut album "The Ice Maiden Comes," is a collection of original songs each based on one of his stories.  For their upcoming release "Mysterious Star: A Tribute to Poe" Thistle has crafted into songs a handful of Edgar Allan Poe's stories and poems, including "Spirits of the Dead," and "The Raven." In addition to performances of her own music, Thistle is also a performer with Astarte Creative Agency, and has toured as a member of renowned cello rock group Rasputina. Alyssa Jackson, a film score composer and classically trained cellist plays in the trio, as does Al Cerulo, a celebrated performer of contemporary classical percussion music.

Thistle took piano lessons from the age of seven and has always especially enjoyed playing the music of Bach. She took singing lessons and sang in rock bands while attending The George School, where she also performed the music of Ulali with the daughter of founder Pura Fe, in both Tuscaroran and English. At Hampshire College she studied singing, theory and composition in multiple genres, using the Five College Consortium to her benefit: jazz at UMass, improvisation and world musics at Hampshire College, South Indian Classical music at Amherst, and western classical theory and composition at Smith College. Thistle finished her formal musical studies at the New School for Jazz & Contemporary Music in Manhattan, achieving a BFA in Jazz Voice with honors. Thistle simultaneously studied Karnatak (South Indian Classical) voice with Saavithri Ramanand in Queens, learning devotional songs of the Brahman caste in the Hindu, Tamil and Sanskrit languages. Before she learned to play the harp, Thistle took up the electric guitar and eventually the drums, creating a three-piece rock band which she named Queen of Sibyls. She recorded an album of songs inspired by the alt rock female-led groups of the 1990's (link to album "Dark Horse" in Music tab).

Thistle began studying harp in her late 20's, under the tutelage of Tomoko Sugarawa, a classical harpist and reviver of the ancient Japanese Kugo harp. Early on, she did some work as a session harpist and vocalist with bands such as Caitlin Cannon and the Cannon Dolls and Ben Shepard. She also took lessons from Marilu Donovan, harpist in the violin/harp duo Leya. During a four year hiatus from music, she created an interior design firm, built an inn in the Catskills and took drum lessons with Sara Landau of The Julie Ruin.  In 2015, when asked to join a band as a backup singer, she returned to the stage and ultimately to the passion she once had for playing harp and composing.

Over the years, THISTLE has included the involvement of some excellent musicians, both on recordings and live performances. They deserve to be noted here:

Jeff Cook: Jeff expertly engineered the recording and mixing of THISTLE's "Mysterious Star: A Tribute to Poe" over a two year period. He began his engineering career in location orchestral recording where he worked with Fort Worth Symphony, Van Cliburn Foundation, and Dallas Wind Symphony. In 2004 Jeff became the director of the recording arts department for the University of North Texas. In 2007 he began working at grammy award winning sound designer Scott Lehrer's studio, 2nd Story Sound. Cook has engineered for many illustrious artists, among them Rufus Wainwright, Meredith Monk, John Zorn, MV Carbon, Lou Reed and Carnegie Hall. 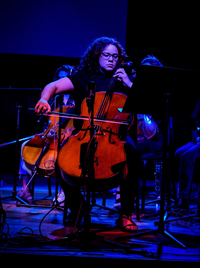 Alyssa L. Jackson: Alyssa is the cellist in THISTLE. A composer, audio engineer, educator, and media artist, she has achieved a BFA in Cello Performance at Brooklyn College, as well as an MFA in Media Scoring from the Feirstein Graduate School of Cinema. She is interning as a composer assistant with renowned LA composer and songwriter Dave Sardy. Alyssa is featured in the photo directly to the left.

Carolin Pook: Carolin did two tours in Germany as part of the THISTLE duo in the early years. And she arranged the music of THISTLE for small orchestra, in which she performed as violinist while conducting. A German born composer and violinist, Carolin is a sought after recording artist and arranger on over 40 recordings for artists such as Kenny Garrett, Die Fantastischen Vier and Mike Doughty. In 2015 she won the Improviser in Residence at Moers, Germany, and still maintains ties to the city's music festival, interviewing international musicians for local television when they come to town. 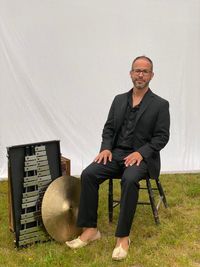 Al Cerulo: Al performs on classical percussion in THISTLE, and recorded most of the percussion on "Mysterious Star: A Tribute to Poe." He is a classical percussionist and an advocate for the commissioning and performing of new works by both established and up-and-coming composers. He has been praised for his work as a musician and educator both nationally and internationally, and has worked alongside composers such as Pierre Boulez, George Crumb, Mario Davidowsky, Michael Gordon, and Steve Reich. Al is featured in the photo directly to the left.

Rami El Asser: Rami performed the darbouka and much of the complementary, yet superbly imaginative percussion on THISTLE's "Mysterious Star: A Tribute to Poe." He performs at venues worldwide with groups including AlSarah & the Nubatones, Zikrayat, and Raquy DÜM. Rami's grooves also can be found on many recordings, soundtracks, and live theatre productions. He recently appeared in the Broadway production of The Band’s Visit. 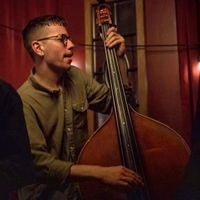 wiak: Nick recorded cello on both "The Ice Maiden Comes" and "Mysterious Star." He is a classically trained multi-instrumentalist, producer and DJ based in Brooklyn, NY. He releases dance, ambient and experimental musics under the name Nick Joz and tours internationally with many ensembles including Jolie Holland, Kimberley Thompson, and on the Peter Evans' Being & Becoming tour. He is featured in the photo directly to the left.

Adam Markiewicz: Adam arranged and performed violin for several songs on THISTLE's debut record "The Ice                  Maiden Comes." He also introduced Thistle to Nick Jozwiak. Adam is a violinist and fellow alum of the New School for Jazz & Contemporary Music. He is the violin and voice to Marilu Donovan's harp in the classically inspired yet unmistakably        alternative duo Leya who performs both nationally and internationally.